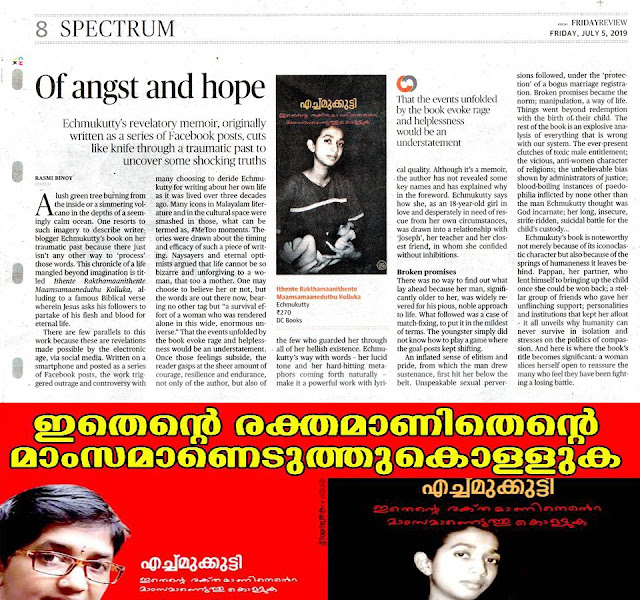 Echmukutty’s revelatory memoir, originally written as a series of Facebook posts, cuts like knife through a traumatic past to uncover some shocking truths

A lush green tree burning from the inside or a simmering volcano in the depths of a seemingly calm ocean. One resorts to such imagery to describe writer-blogger Echmukutty’s book on her traumatic past because there just isn’t any other way to ‘process’ those words. This chronicle of a life mangled beyond imagination is titled Ithente Rakthamaanithente Maamsamaaneduthu Kolluka, alluding to a famous Biblical verse wherein Jesus asks his followers to partake of his flesh and blood for eternal life.

There are few parallels to this work because these are revelations made possible by the electronic age, via social media. Written on a smartphone and posted as a series of Facebook posts, the work triggered outrage and controversy with many choosing to deride Echmukutty for writing about her own life as it was lived over three decades ago. Many icons in Malayalam literature and in the cultural space were smashed in those, what can be termed as, #MeToo moments. Theories were drawn about the timing and efficacy of such a piece of writing. Naysayers and eternal optimists argued that life cannot be so bizarre and unforgiving to a woman, that too a mother. One may choose to believe her or not, but the words are out there now, bearing no other tag but “a survival effort of a woman who was rendered alone in this wide, enormous universe.” That the events unfolded by the book evoke rage and helplessness would be an understatement. Once those feelings subside, the reader gasps at the sheer amount of courage, resilience and endurance, not only of the author, but also of the few who guarded her through all of her hellish existence. Echmukutty’s way with words – her lucid tone and her hard-hitting metaphors coming forth naturally — make it a powerful work with lyrical quality. Although it’s a memoir, the author has not revealed some key names and has explained why in the foreword. Echmukutty says how she, as an 18-year-old girl in love and desperately in need of rescue from her own circumstances, was drawn into a relationship with ‘Joseph’, her teacher and her closest friend, in whom she confided without inhibitions.

There was no way to find out what lay ahead because her man, significantly older to her, was widely revered for his pious, noble approach to life. What followed was a case of match-fixing, to put it in the mildest of terms. The youngster simply did not know how to play a game where the goal-posts kept shifting.

An inflated sense of elitism and pride, from which the man drew sustenance, first hit her below the belt. Unspeakable sexual perversions followed, under the ‘protection’ of a bogus marriage registration. Broken promises became the norm; manipulation, a way of life. Things went beyond redemption with the birth of their child. The rest of the book is an explosive analysis of everything that is wrong with our system. The ever-present clutches of toxic male entitlement; the vicious, anti-women character of religions; the unbelievable bias shown by administrators of justice; blood-boiling instances of paedophilia inflicted by none other than the man Echmukutty thought was God incarnate; her long, insecure, strife-ridden, suicidal battle for the child’s custody…

Echmukuty’s book is noteworthy not merely because of its iconoclastic character but also because of the springs of humaneness it leaves behind. Pappan, her partner, who lent himself to bringing up the child once she could be won back; a stellar group of friends who gave her unflinching support; personalities and institutions that kept her afloat – it all unveils why humanity can never survive in isolation and stresses on the politics of compassion. And here is where the book’s title becomes significant: a woman slices herself open to reassure the many who feel they have been fighting a losing battle.
https://www.thehindu.com/todays-paper/tp-features/tp-fridayreview/of-angst-and-hope/article28290942.ece?fbclid=IwAR2UlSGphAPZLzFe97SkMTmOjTx0f8shG-15UqsJsL30n2wXQpRYvPNV3HM
Posted by Echmukutty at 3:16 PM 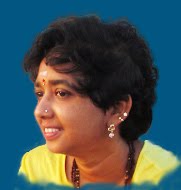